Sustainable IT: The Ins and Outs for a Circular Economy

With the startling global uptick in fires, flooding, damaging storms, and heat waves comes broader coverage in the news media about these issues and their connection to carbon footprints. While fossil fuels used in the transportation industry are critics’ most apparent targets, they much less frequently mention IT systems as major contributors to climate change.

Corporations are subject to increasing consumer and government pressure to reduce emissions, use alternative energy sources and take significant steps to work toward a circular economy. Computing power, pun intended, is one area businesses should look to cut their carbon footprints.

According to this informative BBC article, “Why Your Internet Habits Are Not as Clean as You Think:”

The carbon footprint of our gadgets, the internet and the systems supporting them account for about 3.7% of global greenhouse emissions, according to some estimates. It is similar to the amount produced by the airline industry globally, explains Mike Hazas, a researcher at Lancaster University. And these emissions are predicted to double by 2025

So how can CTOs help in the fight for the environment?

Many organizations reduce costs and help the environment by minimizing the number of printers used within an organization and encouraging employees to reduce their printing output. Yet, there are several other ways to make an even more impactful contribution to your organization’s environmental efforts.

Work with Manufacturers that Design for IT and Technology Asset Reuse

Consumerism in the last half of the 20th century led manufacturers to design products to fail. Known as planned obsolescence, this manufacturing strategy directly contributed to our linear economy that takes resources to make products that won’t last and can’t be reused, resulting in waste. In contrast, manufacturers contribute to a circular economy by designing products to be reusable.

CTOs should evaluate device manufacturers for their commitment to the environment and designing products for reuse. Several organizations like Climate Neutral and Carbon Trust certify companies working to eliminate carbon emissions.

These organizations certify an organization’s carbon footprint neutrality. Carbon neutral is defined as:

Carbon Neutral - or Net Zero Carbon - is a term used to describe the state of an entity (such as a company, service, product or event), where the carbon emissions caused by them have been balanced out by funding an equivalent amount of carbon savings elsewhere in the world.

These savings are generated through helping to fund renewable energy projects and energy efficiency projects, many of which bring additional social and community benefits in developing countries as well as reducing greenhouse gases.

The idea is that a company or party that can’t (or won’t) reduce its CO2 output can work with another to emit less, thus reducing carbon in the atmosphere. When formalized, these types of arrangements are carbon credits.

According to the World Economic Forum: there are three basic types of carbon credit:

Extend Your IT Asset and Device Life

Compounding the climate problem, corporations often set device obsolescence dates to maintain productivity and speed digital transformation rather than wait for devices to reach the end of their useful life.

Extending the life of devices is critical to a circular economy, and productivity doesn’t need to be the sacrificial lamb with programs for reuse, repair, refurbishment, or remanufacturing.

In addition to productivity, another concern organizations might have with these measures for extending device life is security. Cybersecurity is of paramount importance in our digital age. Work with an organization like Compugen to dispose of or refurbish IT assets. We have authorized Microsoft refurbishers, and we adhere to National Institute of Standards and Technology (NIST) data-erasure standards. 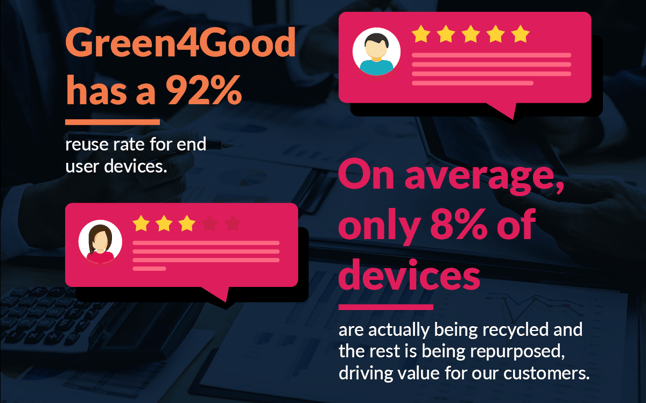 Participate in the Green4Good Program

We designed our Green4Good Program to support organizations that are striving to reduce their IT carbon footprints. Participating organizations can receive carbon credits for IT technology, including networking/storage and smartphones, they turn over for recycling or reuse. All products Compugen refurbishes must meet industry compliance standards and include at least a three-year warranty to meet carbon credits requirements.

Responsible businesses are demonstrating their commitment to the environment by taking several steps to reduce their carbon footprints. IT can and should be included among the strategies to help the environment through recycling and reuse.

For more information, download our guide, "How to Integrate Sustainability into IT Asset Management."

We’re here to help and answer any question you might have. We look forward to hearing from you.